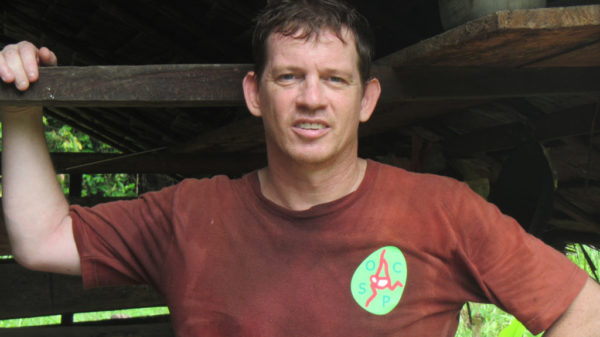 Dr Ian Singleton is a former Zookeeper, having worked with a variety of different species at Whipsnade and Edinburgh zoos before specializing in orangutans when he moved to Jersey Zoo in the British Channel islands in 1989. He then visited Indonesia several times over the years to learn more about wild orangutans until he finally left Jersey in 1996 to begin a Ph.D study of orangutan ranging behavior in the peat swamp forests of Suaq Balimbing, in the Kluet swamps in South Aceh District, in the Leuser Ecosystem. On completion of his thesis, he joined with the Swiss-based PanEco Foundation and Yayasan Ekosistem Lestari in 2001 to establish the Sumatran Orangutan Conservation Programme. He is nowadays kept busy working to confiscate illegal pet orangutans and return them to a life in the wild, in field research and monitoring of the remaining wild Sumatran orangutan population, and in efforts to protect their habitat.